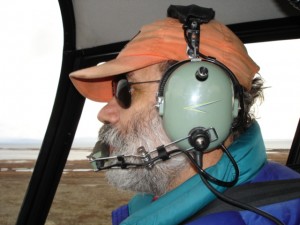 Larry Larrivee first arrived in Alaska in 1954 with his family. After spending 5 years they moved away leaving a lasting impression of the great state of Alaska. After politely being told that he must leave Montana State College after the winter quarter of 1965 he thought it best to join the Army before he was drafted. Larry was one of the youngest US Army Warrant Officer flight training candidates in December of 1965, just 19 years old. By 1966 as a Warrant Officer W1, he was a maintenance test pilot for a major overhaul and repair facility in Bearcat, South Vietnam, with the 9th Infantry Division. Finding life a bit dull while all his peers were raving about combat missions and long flight hour days, he traded his position with a pilot from an Air Calvary Troop flying gunships. After two Distinguished Flying crosses and 760 combat sorties he was transferred to the Transportation Medium Helicopter Company at Fort Richardson, Alaska to finish out his military career. By the time he left the Army he had obtained his ATP in Helicopters and Multiengine and Single Engine Land and Commercial in Single Engine Sea, at the age of only 23 years old.

After the Army, it was back to college during the winter and flying air taxi and charter in Alaska in the summers; both airplanes and helicopters. Being restless again by 1972, he took off one winter to tour the South Pacific and mainly check out New Zealand which seemed to have his particular attraction. During the southern hemisphere summer of 1972 he landed a job doing commercial venison recovery in the South Island, arguably the most adventurous and exciting flying possible. After the first year he was “hooked” which motivated him to finish off his commitments in Alaska, “sell up” and immigrate to New Zealand.

Somewhere around 15,000 red deer later and training over 100 pilots to a commercial helicopter license he had one more box to check. To this day it was the only Maule, four seater fabric covered airplane to fly from Oakland to Hilo, Hilo to Pago Pago and Pago Pago to Auckland. To appreciate this, the year was 1981; there was no GPS and LORAN only went as far as Hawaii, so the flight was flown at night using WWII bubble sextant with celestial navigation.

Hearing about the great money flying helicopters in bush Alaska it was time to check out an idea of flying four months in the northern hemisphere and living the other eight months in New Zealand. A stint with Wilbur’s Flight Operations flying single pilot multi-engine IFR and a Bell 47 the first season and then a season with International Air Transport flying MD500s and wheeled Beavers was added to his experience. Then it was an eight year marriage with Soloy Helicopters doing just about anything that needed to be done with MD500s and the Soloy converted Hiller 12E.

With considerable trepidation, the idea of doing his own “thing” with a Robinson R22 gave birth to Pollux Aviation Ltd. in Alaska. 847 hours were flown that first season from April to December 1991 doing unthought-of utility work with such a small helicopter. By 1997 Pollux had grown to where it operated five R-22s and two R-44’s but a bit of difference of opinion with the Fairbanks FSDO led to the selling of Pollux to a construction company in Naknek and Larry never to return to the USA. However, when all his loyal clients heard he sold up and headed south, there were too many phone calls to ignore. By April of 1998 he was back flying for the new owner. After a year it was announced the construction company’s bond was in jeopardy and Pollux needed to be sold, so it was offered back to Larry.   With one R22 and one R44 and it was “back in the saddle again”.

For the next seventeen years it has been “breaking ice” with the R44 and proving it was a wise option for the utility helicopter market in Alaska. With somewhere close to 40,000 flight hours, he stopped filling in his logbook after 30,000; he still “steers the boat” with a great crew doing all the hard grind now.

Pollux Aviation Ltd. was initially incorporated in New Zealand in 1981.